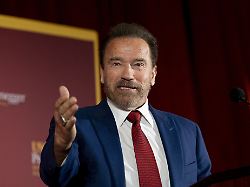 Arnold Schwarzenegger has a new job: The Hollywood star will support California's governor in the corona crisis as a consultant in the future. Meanwhile, Washington expects fewer corona deaths than originally thought.
Former California governor, Hollywood star Arnold Schwarzenegger, is said to assist incumbent governor Gavin Newsom as an advisor during the Corona crisis. The Democrat Newsom presented a working group of politicians and business people on Friday to work on plans for economic opening and a restart after the Corona mandatory break. In addition to Republican Schwarzenegger, California's governor from 2003 to 2011, ex-governors Jerry Brown, Gray Davis and Pete Wilson are also on board. The former Disney boss Bob Iger and Apple CEO Tim Cook join the business community. Newsom announced earlier this week that it would adhere to the extensive exit restrictions for the nearly 40 million residents of the US West Coast state. Only when the number of Covid-19 patients in hospitals decrease will restrictions in public life be eased. According to official information, more than 27,000 infections with Sars-CoV-2 have been detected in California by Friday. So far, almost 1,000 people have died in the west coast state. These numbers are significantly lower than those in the most coronally affected US state of New York with over 16,000 fatalities. The U.S. government currently expects 60,000 to 65,000 deaths from the coronavirus pandemic. The number is far below previous predictions of at least 100,000 deaths in the United States, Trump said at a press conference in the White House. Every single dead man is one too many, the President emphasized. $ 19 billion for farmers At the same time, Trump announced an aid package with a volume of $ 19 billion, around 17.5 billion euros for farmers. Minister of Agriculture Sonny Perdue said that $ 16 billion from this package would be paid directly to farmers. The government will buy up agricultural products with the remaining three billion. Funds have already been released by the U.S. Congress under previous relief packages because of the Corona crisis, and Trump announced on Thursday that it would gradually bring the U.S. back to normal and gradually reopen the economy. Trump's plan provides for a three-step return to normality if certain criteria are met in states or regions in the United States. According to Johns Hopkins University, there are more than 36,000 deaths from coronavirus infection in the United States. More than 650,000 people in the US have tested positive for the virus – more than in any other country in the world.