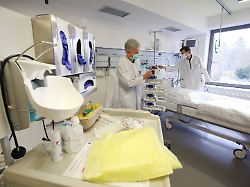 The corona virus continues to spread at high speed in the Federal Republic. While Baden-Württemberg wants to take seriously ill patients from France, Health Minister Spahn plans to regulate the responsibilities between the federal and state governments.
According to the ntv.de count, the number of confirmed infections with the corona virus has risen to more than 20,000. According to this, 71 people had died of lung disease Covid-19 nationwide by the morning. The state of North Rhine-Westphalia is most affected with 23 deaths. Only in Saarland and Mecklenburg-West Pomerania have there been no recorded deaths so far, and NRW is also at the forefront of new infections. According to the Ministry of Health, there are 6740 documented cases (as of 11:30 a.m.). That is an increase of more than 1000 compared to the previous day. Furthermore, the district of Heinsberg reports the most infections: the number increased slightly from 874 to now 916 within 24 hours. There were 629 cases in Cologne, the previous day there were 521. More intervention options for the federal government To react faster and more sharply in the corona crisis in the future To be able to, the Federal Government plans to change the Infection Protection Act according to "FAZ" information. In future, the federal government should be given more opportunities to intervene throughout the state, while the federal states will be partially disempowered, as the newspaper reported, citing a draft from the Federal Ministry of Health to amend the law. In future, the federal government should be able to prohibit, for example, cross-border transport of people, locate the contact persons of infected people by cell phone, centrally control the supply of medicines and protective equipment, and compulsorily recruit medical personnel. According to the report, however, it cannot impose curfews as are currently under discussion and in force in some countries. The draft is therefore to be adopted on Monday in the Federal Cabinet and to be adopted in the express procedure in the Bundestag and Bundesrat later in the week. Federal Minister of Health Jens Spahn told the "FAZ": "The federal and state governments are working hand in hand to tackle this epidemic. Here we bundle competencies And even more importantly: in a situation like this, we will be able to work within hours for doctors, nurses, pharmacists and everyone else who goes beyond the normal level, takes away bureaucracy, adjusts the rules, increases remuneration. "Prime Minister Kretschmann agrees to support. Meanwhile, Baden has -Wuerttemberg's Ministry of Health asked the clinics in the country to take seriously ill Corona patients from France. "The French hospitals near the border have reached the limit of their treatment capacities for patients requiring ventilation," says a letter from the ministry to the managing directors of the Baden-Württemberg hospitals. Prime Minister Winfried Kretschmann "has pledged to support Baden-Württemberg", continues the letter, dated March 19. "We therefore ask you to accept patients from France who require ventilation in your hospitals within the scope of free capacities that are still available." A spokesman for the ministry said: "Even though we have limited capacities in Baden-Württemberg and unfortunately there are also some bottlenecks with us opens up, we naturally try to help our French neighbors. " It is about people who would die without ventilation in the coming days. In regions such as Alsace, capacities were lacking due to the rapidly increasing number of cases. According to the Ministry, Baden-Württemberg currently has enough free ventilation places, there are around 2,300 in the state. According to the hospital company BWKG, around 80 percent are currently occupied, but currently only with fewer than 20 corona patients, as the "Schwäbische Zeitung" reported.