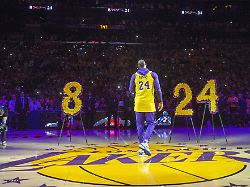 Worldwide, the sudden death of basketball legend Kobe Bryant has deeply shaken fans and companions. The LA Lakers also mourn their former teammate. Almost a week after the fatal accident, the team is back on the field for the first time – and says goodbye in an emotional way.
26 seconds of silence, Kobe calls and "Amazing Grace": The Los Angeles Lakers' first game after the death of their former basketball superstar Kobe Bryant on Friday evening was dedicated to the memory of the athlete and his daughter Gianna. They were killed in a helicopter crash in southern California with seven other people on Sunday. LeBron James (right) points to the sky in memory of Kobe Bryant. His teammates Kentavious Caldwell-Pope (left) and Quinn Cook also mourn. (Photo: imago images / ZUMA Press) The NBA team for which Bryant had run for 20 years and won five championships played against the Portland Trail Blazers at the Staples Center in Los Angeles on Friday. As planned, there would have been a Lakers game against the LA Clippers on January 28th. This was postponed out of respect for the mourners. Before the game started on Friday, LeBron James' team warmed up in number 24 and 8 shirts, the shirt numbers for Bryant, who played for the Los Angeles Lakers throughout his career. In 2016, he ended his successful career. 20,000 T-shirts with the two numbers were distributed to the fans in the stadium. R&B singer Usher started the emotional commemoration with the gospel song "Amazing Grace" before the start of the game. The band Boyz II Men sang the American national anthem. The hall fell silent for 26 seconds. With the silence, the fans expressed their grief for Bryant with the number 24 and his 13-year-old daughter, who was number 2 as a basketball player. A tearful LeBron James read the names of the nine victims of the helicopter crash. Instead of reading from a piece of paper, he wanted to speak with his heart, the player said. Bryant was like a brother to him. They both fought to win and be great. Everyone would now mourn the athlete, but this evening should be a celebration for Bryant.