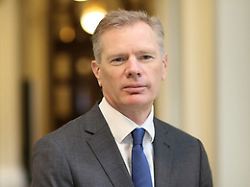 In Tehran the nerves are blank. Security forces kidnap a high-ranking diplomat in protests against the government. Ambassador Macaire, the main representative of London in Iran, is said to have caused demonstrators to "take radical action".
The British ambassador to Iran has been arrested on the sidelines of protests in Tehran, the Tasnim news agency said. The diplomat was only released after a few hours, it was said. Not a man of ill-considered decisions: top diplomat Rob Macaire. (Photo: British Embassy Tehran, gov.uk) Ambassador Rob Macaire took part in a demonstration in front of the "Amir Kabir" University on Saturday evening, Iranian media reported. At the technical college in the center of the Iranian capital, there had previously been a major protest against the shooting down of a Ukrainian passenger plane by Iran. According to the authorities, Macaire is said to have provoked protesters to carry out "radical actions". Macaire was released after "a few hours", but must expect to be called into the Iranian foreign ministry later this Sunday, Tasnim quoted as having been informed Swell. There was no official confirmation from the State Department at first, as Iran had admitted accidentally shooting flight PS752 on Saturday. In the days before, official offices in Iran had spoken of a technical defect in the machine. The entire Iranian leadership expressed regret at the incident. Legal action is to be taken against those responsible, and the plane crashed early Wednesday morning on the flight from Tehran to Kiev shortly after take-off. None of the 176 people on board survived the disaster. According to the passenger list, three people from Great Britain are among the fatalities.