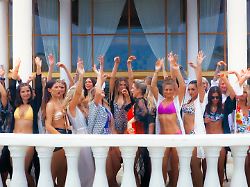 The TV world stares intently at Friday when things are going around again in the jungle camp. But wait, there was still something ?! Right! First of all, the "Bachelor" in the form of Sebastian Preuss reaches for the flower stems. 22 women vie for his favor – among them a few not entirely unknown.
"The Bachelor" starts its tenth round on Wednesday evening. In the anniversary season, Sebastian Preuss starts looking for great love. The kickboxing world champion from Munich runs his own company with three employees parallel to his sports career as a trained master painter. At the age of 18 he was in custody for half a year for assault. The 29-year-old has been single since the beginning of 2018. "I was pretty focused on the sport, plus the business – there was no time for love. Now I'm open to everything and looking forward to the adventure 'Bachelor'. I'm ready for the really big love!", Explains Preuss full of anticipation: the agony of choice In Mexico, he is agonized of choice. 22 single women want to conquer the bachelor for themselves. It is important to him: a well-groomed appearance and a healthy lifestyle, but above all a good heart, loyalty and honesty. Will he find the right one among the candidates? One or the other participant might even seem familiar to him. After all, four of the rose contenders have already had TV experience, so Jessi Fiorini was already looking for her Mr. Right on "Love Island" in 2018. In the second season of the RTL-II show, she fell in love with Sebastian "Hulk" Kögl. The two even ended up in bed together in front of the TV cameras. But only a few weeks after the show, the couple went their separate ways again. Both then continued to collect followers on their social media channels. While Kögl is followed by over 54,000 fans, Fiorini already has more than 107,000 followers. For comparison: "Bachelor" Preuss has "only" 42,800 followers. From GNTM to DSDS Wioleta Psiuk participated in 2010 in "Germany's Next Top Model" (GNTM). At the time, she took tenth place in the casting show by Heidi Klum. Since then she has been working as a model. Jenny Thiede, in turn, was already hoping for happiness in love with the Pro 7 kissing format "Kiss Bang Love". She vied with 14 other single women for the heart of Julius, but was selected in the blind kiss challenge. Fans of "Deutschland sucht den Superstar" (DSDS) might be familiar with Natali Vrtkovska's face. In the last season of the casting show, she even made it into the recall in Thailand. In the end, however, it was only enough for 14th place. What place will she occupy in the "Bachelor"? The Bachelor will run from 8 January at 8:15 p.m. at RTL and can also be called up at TVNow at any time. Further information on the program is also available at RTL.de.