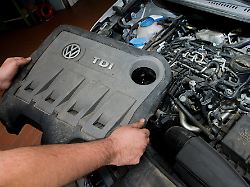 Lawsuits have already been filed against the VW managers responsible for the exhaust gas manipulations, and the public prosecutor is now opening proceedings against other employees. You may have been directly or indirectly involved in the development of the fraud software.
The Braunschweig public prosecutor charged Volkswagen employees with serious fraud in its investigation into the diesel affair. It involves six people, some of whom are accused of tax evasion and false certification in the period between November 2006 and September 2015, as the authority said. They are said to be "significantly responsible" for VW customers and regulators being deliberately misled about the actual exhaust emissions of diesel cars with the help of the software manipulations uncovered in autumn 2015. "Over the years, a total of over nine million manipulated and ineligible motor vehicles have been sold, brought onto the market and approved for road traffic in violation of the law," it said. In Braunschweig, the previous VW CEO Martin Winterkorn has been charged with serious fraud since April – together with four other executives. They are also said to have violated the law against unfair competition. The number of those previously accused in the Braunschweig fraud proceedings thus increases to eleven. However, the investigation relates to a much larger group: there are a total of 32 other people. Investigations into tax evasion "In addition, vehicles in Germany with the supposed emission class Euro 6 were wrongly exempted from vehicle tax for a limited period," the investigators explained. Therefore, it is also about the crime of alleged tax evasion. The lawsuits have not yet been approved by the Braunschweig Regional Court, and this step is still pending in a parallel proceeding in which Winterkorn and today's VW Group CEO Herbert Diess and Chairman of the Supervisory Board Hans Dieter Pötsch have to answer for possible market manipulation. They are said to have communicated the considerable financial risks for Volkswagen to the public too late in 2015. At that time, many investors had to accept sharp losses in the VW share. In the most recent indictment, three of those affected are being held up to act directly "perpetratorily". According to the public prosecutor, the other three are said to have contributed – for example, by participating in the "development, refinement and improvement" of the fraudulent software. The deception program had only fully cleaned vehicle emissions during test bench tests, while the cars emitted significantly more nitrogen oxides on the road. Millions of cars worldwide were affected, VW plunged into a deep crisis and the company did not comment on the charges against individual employees. A spokesman emphasized that the criminal investigations against the company were discontinued after the 2018 fine was paid. This was intended to punish violations of supervisory duties and the skimming of economic advantages in connection with incorrect emission information. VW had to pay around a billion euros.