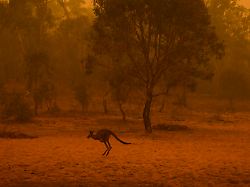 The devastating fires in Australia are said to continue for months. The current breather with some rain will soon be over: Towards the end of the week, the temperatures are expected to rise above the 40-degree mark again. In addition, a huge fire could soon arise.
A little rain and cooler temperatures temporarily made the work of the firefighters a little easier for the fires in southeast Australia. But during the course of the week, temperatures are expected to rise above the 40-degree mark again. New South Wales firefighter chief Shane Fitzsimmons said the more than 2,600 helpers used the "benevolent conditions" to prepare before the fire risk is expected to rise again on Friday. It is feared that the fires in Australia will continue for months. At the border of the two Australian states of New South Wales and Victoria, two fires were moving towards each other, so that a huge fire could start. Hundreds of people were waiting to be rescued by ship in the isolated coastal town of Mallacoota, and 25 people have been killed nationwide since the great fires began in October. More than 2,000 houses were destroyed. More than 10 million hectares were burned down – roughly the size of Bavaria and Baden-Württemberg together. "Thor" actor donates one millionNow it was said that insurance has so far cost 700 million Australian dollars, that is about 430 million Euro. According to the Australian Insurance Association, there have been almost 9,000 damage reports – but the number is expected to increase significantly. US President Donald Trump expressed his concern and condolences in an interview with Australian Prime Minister Scott Morrison, the White House said. He offered the US government US support in the fight against fire. Celebrities also continue to show solidarity: Australian actor Chris Hemsworth ("Thor") claims to have donated one million Australian dollars (620,000 euros). Meanwhile, the German fire department is taking its hat off to the performance of its Australian colleagues. The emergency services are currently doing great things, almost impossible, said the Vice President of the German Fire Brigade Association, Karl-Heinz Knorr, the German Press Agency. "And we have the greatest respect for them!" Knorr emphasized that the conditions in Australia and other parts of the world, such as the taiga, in which such fires sometimes had "apocalyptic dimensions", were not comparable to those in Germany.