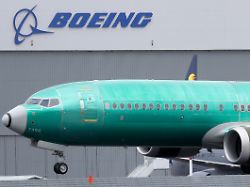 The flight ban for the 737 Max has a massive impact on the business of aircraft manufacturer Boeing: The company will receive fewer orders in 2019 than it has had in 16 years. The biggest competitor benefits from this weakness.
The 737 Max series, which has been banned from flying worldwide after two devastating crashes, caused the US aviation giant Boeing 2019 to suffer severe business losses. For the first time in decades, orders in the commercial aircraft sector even fell, as the Airbus opponent announced in Chicago. The bottom line is that Boeing lost 87 orders in the full year because there were more cancellations than new orders. The group received orders for 246 aircraft last year. The manufacturer has not received so few orders since 2003. Boeing 334.02 The company could not immediately provide information as to whether and when there had ever been a negative annual balance sheet. "This has definitely not happened in the past 30 years," a spokesman told CNBC. After two crashes of the most popular 737 Max model in Indonesia and Ethiopia, in which a total of 346 people died within a few months, Boeing's bestseller has not been allowed to take off since mid-March 2019. As a result, deliveries plummeted, with only 380 commercial aircraft being brought to customers throughout the year – over 50 percent less than in the previous year. Airbus rivals benefited from Boeing's weakness. With 768 new orders and 863 commercial aircraft delivered, the Europeans took over the global market leadership from their US competitor in 2019. Boeing is deeply in crisis because of the 737 Max debacle. It is unclear whether and when the machines can take off again. Production had to be stopped due to the great uncertainty surrounding a re-registration. Boeing chief Dennis Muilenburg was fired in December.