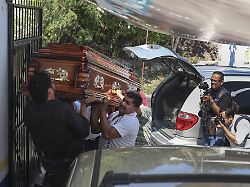 Journalists live dangerously in many countries around the world – not only in war zones like Syria, but also in countries like Mexico due to organized crime. The number of journalists killed is falling overall, but the number of kidnappings is increasing.
According to the Reporters Without Borders (ROG) organization, almost half of the almost 400 journalists in the world are imprisoned in China, Egypt and Saudi Arabia. There, the governments have increased the pressure on media people, ROG board spokesman Michael Rediske said on the occasion of the annual balance sheet on press freedom in Berlin. According to the ROG, there are 120 media professionals in prison in China alone. More than 40 percent of these are citizen journalists who, despite tightened censorship, tried to disseminate independent information via social networks. Most of the prisoners added in 2019 belonged to the Muslim Uighur minority, and at least 49 journalists and other media professionals have been killed worldwide for their work since the beginning of the year, according to the ROG. It is true that significantly fewer media workers died in armed conflicts than in previous years. A country at peace like Mexico is just as dangerous for journalists today as the civil war country Syria, Rediske said. In parts of the Central American country, drug cartels lead a bloody shadow regime. The countries with the most journalists killed were Syria (10 media professionals killed), Mexico (10), Afghanistan (5), Pakistan (4) and Somalia (3). Fourteen journalists were killed across Latin America, with a further 86 media professionals killed in the same period in 2018. However, the number of detainees rose this year. The organization said that 389 media workers are currently in prison, 12 percent more than in the previous year. In Egypt and Saudi Arabia, most of the detainees are in prison with no verdict or charge. The organization looks at the length of time from the beginning of the year to December 1, and in Turkey dozens of journalists were released after prison terms during the year. But several of them were arrested again after a short time. The risk of criminal prosecution has even increased, the report by Reporters Without Borders says. 57 media professionals had been kidnapped worldwide by December 1, mainly in Syria (30), Yemen (15), Iraq (11) and Ukraine (1). The Houthi rebels in Yemen and the separatists in eastern Ukraine treated hostages as "prisoners", charged with serious crimes, and then sentenced to high sentences.