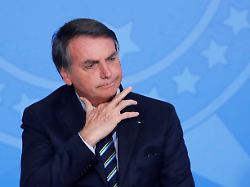 Climate activist Thunberg condemns the murder of two natives in the rainforest of the Amazon. Brazilian President Bolsonaro does not like this: He criticizes the media and pulls against Thunberg from the leather.
Brazilian President Jair Bolsonaro has described Greta Thunberg as a "brat" after she condemned the killing of two natives in the Brazilian Amazon rainforest. "It is remarkable to see the meaning that the media ascribe to a brat like her, a brat," Bolsonaro said. Thunberg had denounced the killing of two indigenous people in the northern Brazilian state of Maranhao the previous day on Twitter. It is a "shame" that the world is silent, while aborigines trying to stop the illegal clearing of forests are killed, "Thunberg said." Every death is worrying, "Bolsonaro said. His government rejects the illegal logging of forests. According to official sources, more than 6,200 square kilometers of forest land were cleared in Brazil between January and July of this year – the highest in more than ten years. Experts blame the Brazilian President's controversial environmental policy for increasing deforestation and reducing forest cover. The Bolsonaro, which has been in office since the beginning of the year, is closely associated with the agricultural lobby and has relaxed environmental regulations.