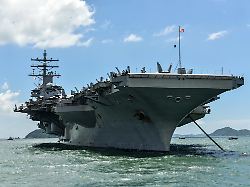 After the announcement, Beijing is fast acting: China blocks the port of Hong Kong for ships of the US military apparatus. US fighters will be deprived of the landing permit. This aggravates the dispute with the US.
The People's Republic of China has prohibited the United States from entering military vessels into the Hong Kong port and deprived the military aircraft of its landing permit. The Beijing government said it had indefinitely suspended applications for US military visits and warned against further sanctions. A US defense official who wants to remain anonymous said China's move will have no impact on US military operations. China's actions are in response to US laws adopted in the past week to support the Hong Kong protests that hit the Asian financial center In recent media reports, it was said that the trade talks have stalled because of the new laws. Rumors of a potential easing or the prospect of a worsening trade conflict between the two largest economies in the world create a volatile mood on global financial markets.