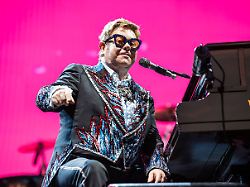 Every year, the Queen honors a number of individuals, politicians and celebrities for their social commitment. The list for the award is compiled by a government agency, which makes an embarrassing mistake – among others, a Bond director and Elton John are affected.
Anyone who wanted to know where singer Elton John lived or director Sam Mendes, who was responsible for "James Bond 007: Skyfall", would pay a visit would have found it in the night from Friday to Saturday. During this period, everyone could access the private addresses of 1,097 British people on the Internet. In addition to private individuals and politicians, there were also a large number of celebrities. According to the "Guardian", singer Olivia Newton-John and "Queen" founding member Roger Taylor have been hit. A reader had drawn the British newspaper's attention to the faux pas. How this breakdown came about is still unclear. The "Cabinet Office", which is working for the British government, is investigating the incident internally. According to the "Guardian", it is already clear that the authority is responsible for the data leak thought. They are among the people whom the British monarch wanted to honor for their social commitment at the turn of the year. She did that too – but her addresses ended up on the Internet for a short time.