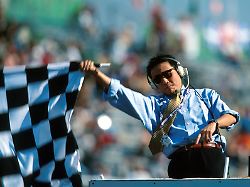 When a Formula 1 race ends, decide the technology in 2019. But because this technology makes mistakes, it will be replaced again in 2020 after just one year. Instead of an overlay on the display then applies the good old checkered flag.
For Sergio Perez it was a fortunate coincidence that the technology did not work. For if the Grand Prix of Japan on October 13 had ended as planned after 53 laps, the Mexican Formula 1 driver would have been 11th in the overall standings of the 2019 World Cup. Because the electronic system accidentally ended the race in Suzuka in the victory of Mercedes driver Valtteri Bottas already one lap earlier and thus after 52 rounds. His accident in lap 53 was without consequences. Perez therefore took four additional points and is at the end of the season not eleventh, but tenth of the overall standings. It is precisely this technical error that leads to the abolition of the regulation for 2020, which was only introduced this year. Then there is no longer an ad on the driver's display as the binding end of the race. But again the time-tested panning of a real checkered flag. The panning was indeed this year, but more for aesthetic as well as athletic reasons. Because it meant the spectators at the track and the screens while the race was over, but was not relevant for the drivers. In the 2019 season was: The race is officially over when the drivers get this displayed on their display; regardless of whether a flag is panned at the finish line. After the mistake in Japan it is already over. For 2020 applies again: Who drives over the finish line and sees a black-and-white checkered flag, the race has geschafft.Dabei the system had been specially introduced to avoid such errors. In the 2018 season, the Grand Prix of Canada Model Winnie Harlow had the checkered flag also one lap too early. The consequence of this error was the introduction of the display solution – which proved to be similarly error-prone. By the way, Perez was suffering at the time. He overtook Kevin Magnussen only after the finish line. However, since it was only about places 13 and 14, that cost at least no valuable championship points.