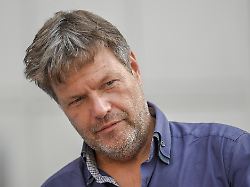 The SPD wants the 2009 into the Basic Law debt brake "perspective" overcome. The Union wants to hold on to her. "Both are wrong," says Green Party boss Habeck. He advocates a "middle ground".
In the debate fueled by the SPD on the debt brake in the Basic Law, Greens leader Robert Habeck has spoken out in favor of reforming the regulation. "After the SPD party convention happened exactly what was to be expected, the SPD and the union get caught up in an ideological dispute," said Habeck the German Press Agency. "The SPD says the debt brake has to go, the Union says it has to be exactly as it was decided 10 years ago, both are wrong." As a "middle ground", Habeck suggested reformulating the debt brake "in a timely fashion." First, by introducing an investment rule that prevents public assets, schools, bridges, swimming pools from being worn out; secondly, by applying the European debt criteria also applies in Germany. " According to Habeck, Germany could invest 35 billion euros in infrastructure and thus make the necessary expenditures for climate protection. "So that the funds can really run off, it needs a long-term, reliable investment path instead of a one-off straw fire." Pulse braking in the Basic Law since 2009 The SPD party congress had called on the weekend, the debt brake 2in its current form in perspective "overcome, to more investment Previously, the new party leader Norbert Walter-Borjans had called for an end to the debt brake in the Basic Law.The Union rejected this immediately.The debt brake was included in the Basic Law in 2009. It stipulates that the federal government since 2016 a maximum of 0.35 percent of gross domestic product to new debt.