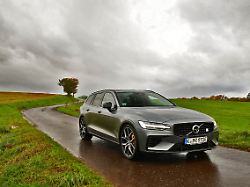 
Volvo's sporty-green corner
Does it have to be a V60 Polestar Engineered?