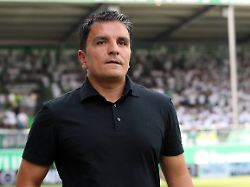 Hannover 96 presents its new coach: Kenan Kocak to save the weakening Bundesliga relegated from being passed in the second division on the relegation ranks. The football coach receives a contract until the end of the season.
Second division football Hannover 96 has Kenan Kocak committed as a coach. The 38-year-old receives a contract until the end of the current season and succeeds the Bundesliga relegated to succeed Mirko Slomka, who was relieved of his duties on 3 November. The Lower Saxony take in the current second league table only the 15th place. Kocak trained until October 2018, the second division SV Sandhausen. "With Kenan Kocak, we have been able to win over an ambitious coach who, despite his young years, already has a great deal of experience in his job and already knows the 2nd league well," says Hanover sporting director Jan Schlaudraff in a club statement. "In his career so far, he has always managed to give his teams stability and security." Kocak's first competitive game is the home side of the Red on 25 November against Darmstadt 98.The 38-year-old had been released in the season 2018/19 shortly after the start of his third season in Sandhausen. Previously, he coached in Mannheim the VfR and the SV Waldhof – missed there in 2016 as champions of the Regionalliga Südwest in the promotion relegation against the Sportfreunde Lotte, however, the leap into the third Liga.Vom Slomka had the Niedersachsen on 3 November after just once four months apart. Thus, the Bundesliga relegated had drawn the consequences of the so disappointing season so far. Hannover have not won any home games in the current season. Hannover lags clearly behind its claims with only three wins from 14 games. Instead of the resurgence plays 96 against the descent. After the clear 0: 4 (0: 1) defeat at 1 FC Heidenheim last weekend, the Lower Saxony slipped down to 15th place in the table and are only one point ahead of the relegation rank 16.