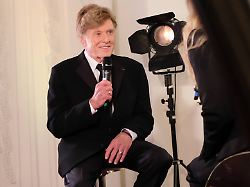 US President Trump is preparing for the next election, but his opponents are also mobilizing. Hollywood star Robert Redford, who more often comes up with political analysis, calls all Americans into the field against Trump. There were only eleven months left to end the president's dictatorial course.
Hollywood legend Robert Redford has accused US President Donald Trump of an "attack" on US values. Trump attacks "like a dictator" on "everything this country stands for," the 83-year-old actor and director wrote in a post for the NBC News website. The country is at a critical moment when it has "a lot to lose," warned Redford. He lamented a profound polarization of the country under Trump. The US would no longer be defined as the United States but as the "divided states of America." Redford called on US citizens to engage politically in the run-up to the next presidential election in November 2020. The US has only eleven months left to "get the ship back on track" and avert the "disaster ahead", he wrote with a view to a possible re-election Trumps.Redford has in his cinematic work again and again critical of the social and political conditions in his country. For years he has been involved in climate protection.